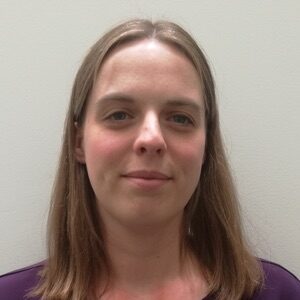 International Nurses Day is celebrated every year on 12 May, the birthday of Florence Nightingale. The day is even more significant this year as it is the 200th anniversary of her birth, during the International Year of the Nurse and Midwife.

As we thank nurses and their colleagues for their work on the NHS frontline we would also like to remember and celebrate the lives of nurses who have saved numerous lives on the military frontline. Jessie Ritchie was one such nurse, even compared to Nightingale in The British Journal of Nursing’s obituary:

“The gracious ‘Lady of the Lamp’ had no worthier claimant to a share in her illustrious lineage.” 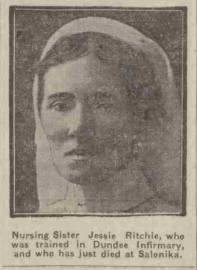 Jessie Ritchie was born in Cargill, Perthshire on 25 March 1866. She grew up on the family farm at West Whitefield with her five siblings and parents, Alexander and Jessie Ritchie (née Douglas). With her 21st birthday approaching, Jessie began her training at the Royal Infirmary, Dundee. From 1890 to 1894 she was a Sister in charge of the wards. Jessie’s career took her away from Scotland, to Liverpool and London. Since 1897, she was on the staff of the Nurses’ Co-operation, Cavendish Street, London. Her service records reveal that she also worked at 27 Harley Street with the Irish surgeon, Sir Peter Freyer.

With the outbreak of the Second Boer War, Jessie had her first experience as a military nurse. She worked as Matron at the Orange River Refugee Camp in South Africa with the Army Nursing Service. Days after the signing of the peace treaty, Jessie met General Smuts at the Camp. Smuts disbanded his commando and reportedly “Nurse Ritchie entertained him at tea.” His autograph survives in her birthday book.

Jessie’s experience of working in the Boer War did not put her off military nursing. In early 1904, she applied to join the Queen Alexandra’s Imperial Military Nursing Service (QAIMNS) but unfortunately she was unsuccessful. Five years later, she applied to join the QAIMNS Reserve which committed her to 12 months service if called up. At the outbreak of the First World War, Jessie was posted on mobilisation to the No.5 General Hospital, Southsea on 11 August 1914. From here she was sent to France to work as a Staff Nurse.

She was retired from the British Expeditionary Force in November 1915 and transferred to 21 Stationary Hospital as a Staff Nurse with the British Salonika Force. At the same time, the 10th Battalion of The Black Watch were moved with the 26th Division to Salonika. Preparing to leave, Jessie was reported to have sent gifts to the “boys” she cared for in the hospital in Le Havre. She appeared to have a similar impact in Salonika, with her personal belongings including aluminium souvenir rings made by patients.

In July 1916 Jessie was reported to be dangerously ill. Despite her Matron’s concern for her health, Jessie had signed on for another year of service. She died on 13 August 1916, aged 50, after three weeks of illness from dysentery. For her service, Jessie was awarded the Victory Medal and the 1914 Star. She was also posthumously mentioned in a despatch for her distinguished conduct in the field.

In a report by the Commanding Officer:

“Her death can be attributed to her devotion to duty. Most of her time was spent in nursing enteric or dysentery. She would never spare herself. The well-being and comfort of her patients was always her first consideration, and she was untiring in her care of them. There was no doubt that the heat during June and July last year tried her very much; but she would never give in, and had even signed on for another year. . . . She had no reserve of strength left to fall back upon.”